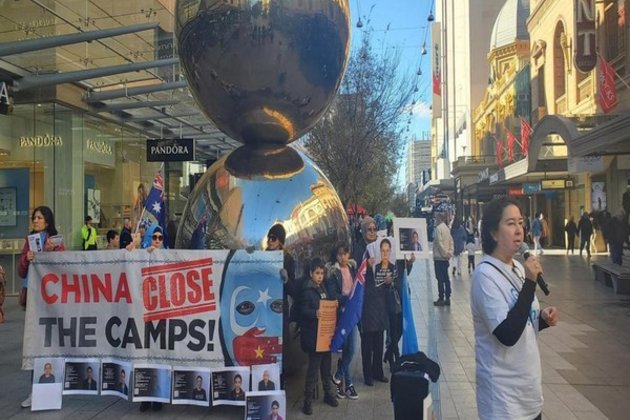 The Urumqi protest organised by AUTWA with the support of UFF was attended by roughly 15 members along with some children and teenagers from the community.

To mark the 13th anniversary, the protestors gathered at the Silver Balls sculpture at the Rundle Mall, holding placards and pictures of those who died in the riots demanding the government to stop the Uyghur's genocide.

During the protest, there was a petition to collect signatures from the public. People were asked to sign the petition demanding the Australian government to ban the import of products made through Uyghur Forced Labour from China's Xinjiang region.

"We need your signature to make sure no product made by forced Uyghur labour enters Australia. Sign a petition to ask the government to stop the Uyghur genocide and Uyghur forced labour. Not just Uyghur forced labour but stop forced labour across the world. We cannot be complicit; we cannot buy products that say, made by blood tears and people lives," said a member of the AUTWA.

AUTWA also launched an online media campaign for the event. The clips of the event have been watched more than 1000 times. In the Uyghur language, the campaign launching video has been watched over 1,000 times on Facebook. In support of this, many people changed their profile pictures to the posts.

The campaign which started with the event on Tuesday at 11 am has not ended yet and is yet to continue for another 17 hours.

"We remember the victims of the Urumqi Massacre and demand the Chinese government stop the uyghur genocide. Join us and be the voices of the millions of innocent people," tweeted AUTWA calling on people to join them.

Speaking of the incident that took place on July 5, 2009, when violent riots broke out in Urumqi, the capital city of Xinjiang. The Chinese government launched a crackdown against Uyghurs protesting against the killing of two Uyghurs. Thousands of protestors were killed, disappeared or injured, the AUTWA member said.

"We are here because there is a genocide being committed against the Uyghurs by the Chinese Communist regime. 16 Uyghurs were murdered on July 5, 2009, in East Turkistan. Thousands of peaceful protests were carried out against the Chinese government. But what they want us to believe is that only two Uyghurs died as the Chinese government never tells the truth. Upto 5000 Uyghurs were taken to the concentration camps. Since then, the lives of Uyghurs and their everyday freedom in East Turkistan under Xi Jinping and Li Keqiang have been under attack."AUTWA protested against the Chinese Communist Party's oppression of Uyghurs in East Turkmenistan and the leaked document, known as Xinjiang Police Files, from the internment camps in the Xinjiang Uyghur Autonomous Region (XUAR), which shows the Chinese government's plan of genocide and crimes against Uyghurs.

The AUTWA member further said that Chinese authorities have been harvesting organs from persecuted Uyghurs as they are made to work in slave labour camps. The major industries employ forced labour. She said, "We are being cleaned out, made disappeared from the earth. What China has done in Hong Kong, Tibet and Taiwan for decades and we have not been able to stop it. Once Hong Kong is done Australia is next."Notably, on July 5, 2009, violent riots broke out in Urumqi, the capital city of Xinjiang. The Chinese government launched a crackdown against Uyghurs protesting against the killing of two Uyghurs. Thousands of protestors were killed, disappeared or injured.

According to officials, a total of 197 people died, with 1,721 suffered injuries in the riot.

China's increasing atrocities toward Uyghurs and other Turkic Muslim populations in the Xinjiang region including mass arbitrary detention, forced labour, torture, forced sterilization, separation of children from parents and destruction of minority culture, shows the human rights abuses against the community.

Several countries, including the US, Canada and the Netherlands, have accused China of committing genocide - defined by international convention as the "intent to destroy, in whole or in part, a national, ethnical, racial or religious group".

However, Beijing has vehemently denied all accusations of human rights abuses in the region and says that all ethnic groups in Xinjiang live happily. (ANI)