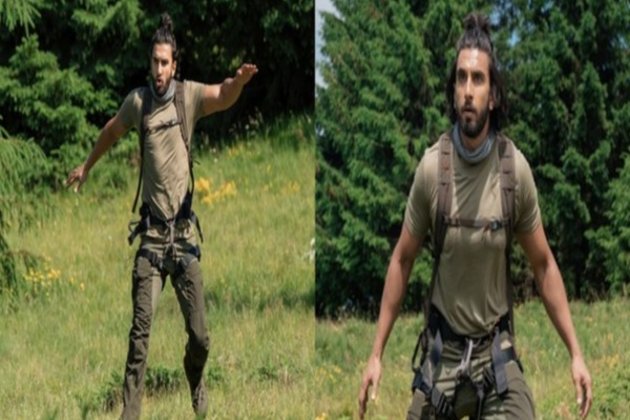 Mumbai (Maharashtra) [India], July 5 (ANI): Ranveer Singh is the new subject of memes! Ranveer will soon be appearing in Netflix's 'Ranveer vs Wild with Bear Grylls' and ever since the trailer was released, Netizens have been having a meme fest.

Most actors take offence but Ranveer is known for being hilarious, and witty and most of all, he is one of the very few actors who can take a joke on himself. On Tuesday, he took to his Instagram to share a series of memes made by Twitter and Instagram users and they will leave you in splits!The memes show stills of the trailer where Ranveer is in the midst of the action. In some pictures, he is seen running away, and in some, he is standing still wearing an olive green T-shirt, flaunting his half-bun. There were also some photoshopped images where he is a part of 'The Avengers'. Netizens drew some hilarious comparisons with cricketer Rishabh Pant when he goes behind the wickets for wicketkeeping. Check them out:Last month, Netflix India dropped a new trailer of Ranveer Vs Wild With Bear Grylls, an adventure-based show, which will premier on July 8. Netflix India captioned the video, "Ab @ranveersingh ki zindagi aap ke haath mein! Button dabao and unhe bachao! RanveerVsWildWithBearGrylls, Netflix India's first interactive show drops on July 8th."In the trailer, Ranveer Singh could be seen surviving in the wild with adventurer and host Bear Grylls. Ranveer could also be seen getting hold of a special flower for his wife, actor Deepika Padukone, he said, "Pyaar ke liye log chaand taare tod ke laate hain, main Deepika ke liye ek phool tod ke laane waala hoon. Woh bahut special phool hai, woh kabhi marta nahi hai, bilkul meri pyaar ki tarah. (People move mountains for love, I'm going to get a special flower for Deepika. Just like my love, the flower never dies.)"Ranveer is known for his versatility - he is an actor, fashion icon, dancer, and rapper, and always tries to push his boundaries with each of his performances, and now with this new collaboration, the actor is all set to hit 'bahot bahot hard' in this crazy and wild journey. (ANI)